home / blog / tips for living with starch and sucrose intolerance

There are many different enzyme deficiencies that can lead to a variety of food intolerances. It’s important to identify the root cause of an intolerance so you can address it properly.

One common food intolerance is an inability to properly digest starch and sucrose.

what is a starch and sucrose intolerance?

Starch and sucrose are carbohydrates that tend to show up a lot in the average human diet. For instance, fruits and table sugar come high in sucrose. Starch also shows up throughout a variety of common food staples, like rice, pasta, bread, and potatoes.

When the body can’t break down and digest starch and sucrose, that means you have an intolerance to those compounds. The results aren’t life-threatening or even particularly dangerous in most cases — as is the case with a food allergy. However, it can still be severely uncomfortable and even painful at times.

To use starch and sucrose as an example, if your body can’t properly break down these common items, you can end up feeling bloated, crampy, and gassy. You can either become constipated or develop diarrhea. Abdominal pain is a frequent symptom, too, and children can often be underweight or suffer from slowed growth due to a lack of energy from their diet.

One of the most common reasons to struggle with starch and sucrose intolerance is due to having congenital sucrase-isomaltase deficiency (also called CSID). If the deficiency isn’t an inherited defect, the “C” is dropped, and it’s simply referred to as SID.

In either case, the condition is rare in Europe, but it is more common in North America. It is more prevalent in certain populations, like Eskimos, although some studies have indicated that it is generally more common amongst the American population, as a whole, as well.

There are two primary ways to manage starch and sucrose intolerance.

First, there is the option of going on a diet to restrict or eliminate these substances from your daily eating habits. In most cases, the emphasis is on reducing sucrose as much as possible, as that is the prime culprit behind the intolerance. However, starch should also only be tolerated in small amounts.

One study found that shifting to a sucrose-free diet with restricted starch intake had remarkable effects. To be fair, though, properly overseeing this kind of diet is challenging. Sucrose, in particular, is in a lot of processed foods. That leads us to our second recommendation.

Along with a sucrose and starch-restrictive diet, you can use Intoleran’s starchway to help with ongoing digestional concerns. The product contains the digestive enzymes Glucoamylase and Invertase, which help the body break down starches and sucrose. The supplement is made with pure, vegan ingredients and no additional additives. It can be taken whenever you consume troublesome foods in order to ameliorate their effects.

At Intoleran, we’re on a mission to restore the joy of eating food to daily life. When that experience is inhibited by a starch and sucrose intolerance, it can impact your quality of life.

Instead, set up a diet that can take the edge off of your intolerance symptoms. Then, pick up a box of starchway to give you a tool you can use to manage day-to-day eating experiences without the fear of paying the price in the future. 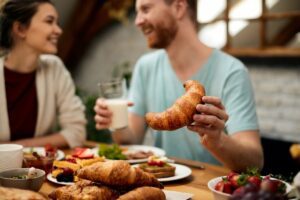 what’s the difference between gluten and fructan intolerances

The health and wellness world is intensely interested in food intolerances at the moment. However, interest doesn’t always equate to

Most people are familiar with the idea of food intolerance. Common struggles to digest a variety of different foods can